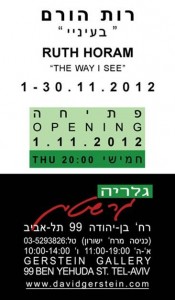 "For me, drawing and printing serve my wish to seek and surprise, especially myself. This is why I overlook rules and boundaries and do as my gut and heart tell me. Subjects are chosen at random from the mundane and immediate environment. Sometime I simply pick up a twig that catches my eye and that's how it starts. The result often surprises and pleases me, for each time anewI stand at the work table with - if I'm lucky - the tip of a thread of ideas". (Ruth Horam 2012)

It is difficult to say what attracts one most, the product of Ruth Horam's work or the artist herself. You cannot differentiate between them, for the gardener and garden are one. The fruits of her labors encapsulate her entire experience and being.

Complexity and simplicity go together. On the one hand the lightness of a feather, needle-point fabrics, floating flake-like letters, while on the other, layer upon layer of solid color, rich earth. Perhaps it is sheer life-force and innocent curiosity that dictate this combination, her declared signature. You could call this essentially the toolbox at Ruth Horam's disposal; the abilityto live the moment here and now. To make the most of a fresh look, give it meaning, be a part of it.

Ruth's ability to celebrate life and treat it as a gift is clearly expressed in her work. That same celebration of life makes the viewer feel that at any given moment the contours can dissolve, expand and reach further.

For the past fifteen years Ruth has worked at the Jerusalem Print Workshop, doing multimedia screen-printing on paper, the screen serving as the basis upon which Horam adds various techniques: free or photographed screen prints, collages, brush dabs and so on - most of them developed over a long period. Using, as she does, paper cuttings, leaves and twigs, scraps of fabric, urban and nature photos, sketching and applying screens creates an effect of deep transparency and a unique range of colors. Embedded in her work are various cultural influences to which she was exposed in the different countries she visited and lived in.

Dear friends, good evening and thank you for coming.

I wanted to use this evening to congratulate my mother.

My congratulations for Ruth – It's like this: take some oranges, squeeze them. Pour the juice into a small pot – heat but don't boil, that would make it bitter. Gently add a spoon of cornflour. When the liquid starts to thicken, but not too much, pour it into glasses, let it cool and place in the fridge.

All right, if that is not absolutely clear, it's about Rutti's flagship dessert that I, as a child, would sometimes love to have after lunch. One teaspoonful after another. Eagerly scraping round the edges it was obvious that no child in Rehavia had anything so delicious. And really, I have no idea why this childhood memory about orange pudding popped up. As most of us know, culinary business is definitely not one of Rutti's favorite pursuits.

And then, coming from school each day, opening the gate, climbing the steps to the garden, a stone-paved path brings me to the entrance. Opening the door and entering the hall, turpentine vapors dilate my nostrils. A studio to the left awaits me. In the center is an easel with a picture at various stages of work. Next to it is a table. On it are tubes, jars and a whole lot of brushes. Ruth, in the middle, in a paint-splotched overall, smiles at me. You're back? Lovelyl! That's how it was in Korea.

And when I think of Ruth and her works the line between them soon gets blurred. It's hard to explain, but there is somethingabout that precision that is real and unconfined. The works she creates are the totality of her life experiences, the cultures she has absorbed, her daring, fearlessness, and her look. Yes, that look, always fresh, always curious. Especially the way she chooses to live life each and every day. And whenever I get a chance to see new works she brings from the print workshop – it is not just to observe, it's like going in the sea first day of the season. Re-visiting the familiar, opening up in you a landscape held by excited anticipation of the unexpected. Sometimes it's almost like the wind settling between branches. Then it is quite clear thatsomething very tangible of Rutti's resides in her works.