A rare collection of Antique Keys 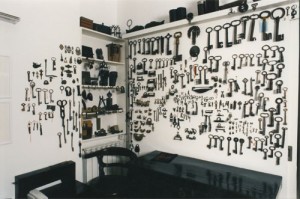 From the 1th century to the end of the 19th century.

The collection began as a hobby shared by artist Ruth Horam and her husband, the late Ambassador Yehuda Horam -- among the founders of Israel's Foreign Ministry. In the course of diplomatic service abroad the collection was developed and expanded. Today it comprises about 500 pieces.

The collection contains keys from the Roman Period found at Kumran and other parts of Israel. These keys were purchased in Israel immediately after the Six-Day War, mostly from Arab dealers in East Jerusalem.

During diplomatic service from the 1950's to 2000, keys and locks were bought dating between the 1th century to the end of the 19th century. Many of them from countries in Asia, Oceania, Africa and Europe.

The collection was active for many years, during which acquisitions were made at auctions, rural markets, flea markets and antique fairs. On noumouris occasions Items were acquired with the advice of experts at the Rouen Metalwork Museum, the Lock Museum, Paris, and the British Museum, London.

Among the rarer and more notable pieces in the collection: